Cristina Caffarra introduced the discussions by referring to the report of the House Judiciary Antitrust Subcommittee entitled Investigation of Competition in the Digital Marketplace : Majority Staff Report and Recommendations, published three weeks ago after much anticipation. The investigation, led by Chairman David Cicilline, focused on the state of competition in the digital economy. The report deals in great detail with the challenges raised by the concentration of economic power in the hands of the large technical platforms, and by their business practices. The findings are supported by an impressive amount of factual evidence (internal documents, hearings, submissions from experts, interviews, etc.). The report repeatedly highlights multiple ways in which the enormous power of the large digital platforms impacts businesses dependent on them, as well as users, and concludes with a series of possible remedies to restore competition in the digital economy, strengthen the antitrust laws and reinvigorate antitrust enforcement. That said, the Report is not a legal document, but ultimately a political statement with plenty of lofty languages : “as a charter of economic liberty, the antitrust laws are the backbone of open and fair markets… Congress must lead the path forward to modernise them for the economy of today, as well as tomorrow. Our laws must be updated to ensure that our economy remains vibrant and open in the digital age. Congress must also ensure that the antitrust agencies aggressively and fairly enforce the law.”

Ms Caffarra invited the panellists to discuss the significance and the implications of this report in terms of future direction and pace of enforcement in the US. She also noted the US DOJ issued just a couple of weeks after the Report their complaint against Google – a long-awaited sign of action in a world where U.S. antitrust enforcement over the last couple of decades had come to be regarded globally as anaemic and decrepit, allowing markets to concentrate systematically, particularly in the digital space. She introduced Lina Khan, who has worked closely with Chairman Cicilline and is widely credited from an intellectual perspective as a main author of the report, as well as Rupprecht Podszun, Pierre Régibeau, and Mike Walker, who are key players on the European scene, inviting them to share their views on how the report has been perceived in Europe and the comparison with the European approach. 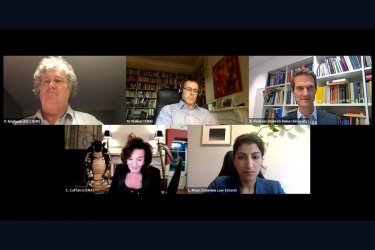