Alec Burnside (Partner, Dechert) introduced the discussions by explaining that much has been written on the topic of competition and sustainability over the years, but that there was now a need for action. He added that the webinar would not be a technical discussion or theoretical debate but would focus on practical guidance. Mr Burnside stressed the definition of sustainability : it derives from the United Nations Sustainable Development Goals, and goes far further than just the protection of the environment, but includes for example also poverty and inequality. The debate must not be limited to environmental agreements but equally cover social agreements, e.g. living wage initiatives.

Alec Burnside then briefly laid out the various means available to assess sustainability agreements : (1) absence of restriction of competition ; (2) “Albany” route ; (3) ancillary restraints/objective necessity doctrine ; (4) Article 101(3) TFEU exemption ; and (5) standardisation agreements. The supporting slides contain hyperlinks to a wealth of supporting literature, for those wanting to read. But this webinar was, rather, a call to action : authorities should give robust guidance, both general and specific ; and businesses should not use antitrust as an excuse for inaction, but take advantage of the readiness of the authorities to give guidance.

Martijn Snoep (Chairman, Netherlands Authority for Consumers and Markets (ACM)) focused on the recently published ACM’s draft guidelines on the compatibility of sustainability agreements with competition law. He explained that the Guidelines were needed to address two concerns. 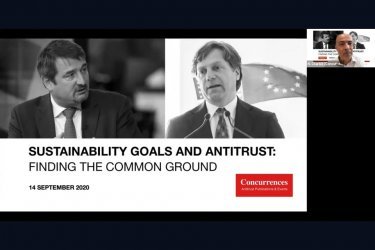