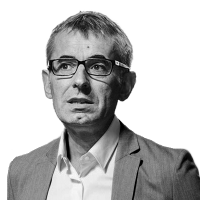 Pierre Cahuc is a French economist who currently works as professor of Economics at Sciences Po. He is program director for the IZA Institute of Labor Economics’s programme "Labour Markets" and research fellow at CEPR. His research focuses mainly on labour economics and its relationship with macroeconomics. In 2001, he was awarded the Prize of the Best Young Economist of France for his contributions to economic research. He belongs to the most highly cited economists in France and Europe’s leading labour economists. Pierre Cahuc’s research focuses mainly on labour economics. He has written books on the economics of salary negotiations, the reduction of working time, unemployment in France, social security, job flows, minimum wages, unemployment insurance, vocational education, economic debate, and social trust ; his book on this last topic, The Society of Defiance ("La Société de Défiance") written with Yann Algan, documents how distrust between French citizens among each other as well as with regard to the market economy and government has been growing since the 1990s.