The judgment in the O2 case has been described as a bombshell. It annulled the Commission’s decision prohibiting the merger between several UK telecommunications operators. There was a reduction from 4 to 3 operators in an oligopolistic market, with no reinforcement of a dominant position.

Until the late 1990s, economic assessments by the Commission were a hands-off area in EU judicial review. In 2002, the Commission received a real setback in cases Airtours, Tetra-Laval and Schneider. The Court made it clear that it would carry out a full review and developed a deep and critical analysis of the details of the economic assessments. As a result, Mario Monti appointed a Chief Economist and increased the number of economists within the DG COMP.

Since then, the grounds for review have been clarified, although all merger assessments are necessarily prospective and imply inherent uncertainty. The Court stated in UPS that the chains of likely cause and effect must be examined. The significant impediment to effective competition (SIEC) must be a “direct and immediate” result of the merger, but it is sufficient that the presumed future conduct of the merged entity is “made possible and economically rational” (Cisco). The complexity of theories of harm does not affect the standard of proof but will affect the assessment of the likelihood (Bertelsmann/Sony). The purpose of examining the possible effects is to identify the “economic outcome attributable to the concentration which is the most likely” (GE). It is not possible to cumulate a series of different possibilities which each entail a risk of SIEC.

The case-law still left open the questions of the standard of proof: was it a balance of probabilities, a “strong probability” or “sufficiently realistic and plausible”? There was no case law on Regulation 139/2004 prohibition decisions and the introduction of a new test based on non-coordinated effects. Most cases relating to merger control came from clearance decisions, with or without commitments. In Sun Chemicals the case was initiated by a complainant, in Ryanair and Cisco by a competitor, and in Test-Achat by consumers. 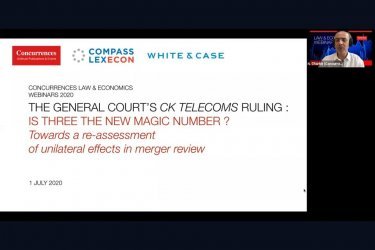