Frédéric Jenny introduced the panel, highlighting the importance of counterfactual scenarios in merger control. According to the EU Horizontal Merger Guidelines, it consists of “compar[ing] the competitive conditions that would result from the notified merger with the conditions that would have prevailed without the merger.” The counterfactual is the hypothetical scenario in which the merger would not take place. One can find the counterfactual by combining two sets of considerations : the first is a static set of considerations – assessing what the premerger reality of the market was. The second is an assessment of the likelihood of events that could come and change the market, either the structure of the market (for example, is there a likelihood of entry in the market or is there a likelihood of innovation) as well as the likelihood of changes in the behaviour of firms (are there going to be coordinated effects, are there going to be unilateral effects) once the merger has taken place. The whole process requires gathering a lot of information from the parties, but also suppliers, competitors, and customers of the merging firms to get a better sense of what is the dynamic and the reality of the merger. In the context of a crisis, this task is made even more difficult as major and unpredictable market changes occur – as seen in the CMA’s decision Amazon/Deliveroo. In addition, remedies engineering is made harder : in a time of crisis or a perspective of crisis, some remedies may not be as available as they are in more normal times — for example, structural remedies may be more difficult to consider because it is unlikely that anybody would buy the assets that would need to be sold. 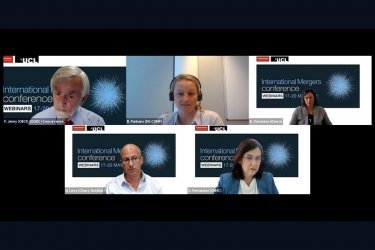