Olivier Guersent began by acknowledging that the DMA is an illustration of the Commission’s take on competition policy as regards innovation. Innovation and price conditions have been for a long time a key focus of competition policies throughout the world. A well-functioning competition regime should protect entrepreneurs’ freedom to innovate, preserve their incentives to do so, and bring resulting products and services to the market in a cost-efficient way. The reflection on the conditions of such a regime developed as innovation theories of harm has grown more and more important at DG COMP in recent years, across the entire spectrum of instruments. Merger control, for instance : the Novartis/GlaxoSmithKline merger was the occasion for the Commission to ensure that research on innovative drugs would not be hindered by the consequences of this deal. Three years later, the remedy taker who was entrusted to carry on the research was producing a cutting-edge drug for dangerous types of skin cancers. Antitrust rules also have their role to play. As a new framework is currently work in progress, with the purpose of providing guidance to the industry regarding inter alia data sharing and sustainability agreements, the Commission has not waited for it to step up its enforcement efforts on innovation : the drive-in Broadcom and Google Android investigations was clearly to prevent dominant players from engaging in conducts that would entrench their market position, raise higher barriers to entry, and limit the growth of rivals, and were very much driven by innovation theories of harm. Finally, Stade aids : Important Projects of Common European Interest (IPCEI) foster cross-border industrial cooperation in several strategic supply chains. Notably, IPCEI is being developed in the fields of micro components, hydrogen and batteries which are crucial for pan-European research and innovation on all the segments of the value chain. Mr. Guersent believes that EU-led innovation in renewables and energy efficiency would not have flourished, at least not to that extent and with the same cost synergies, if the EU had not forced market openings, and if national integrated energy monopolies had still been in place. 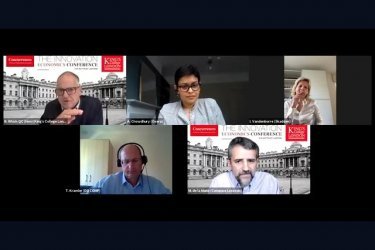