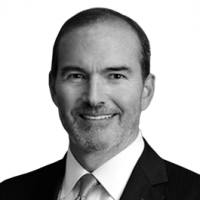 John Flynn is co-chair of Jenner & Block’s Communications, Internet, and Technology Practice and a partner in its Washington, DC office. He represents telecom, media, and technology companies in a wide variety of matters, including merger proceedings and other government investigations, technology-related litigation, internet and wireless regulatory issues, and telecommunications transactions. In achieving results for clients, Mr. Flynn draws on more than 25 years of communications and technology experience spanning government, private practice, and the private sector. He is recognized as a leading lawyer by Chambers USA and the Legal 500, which calls him a “tough, fair problem-solver.” He received his JD, magna cum laude, from the Georgetown University Law Center in 1995, where he served as the Senior Notes and Comments Editor of The Georgetown Law Journal. He received his MA in International Policy Studies and AB in Political Science, with distinction, from Stanford University. Mr. Flynn clerked for the Hon. Edward R. Becker of the U.S. Court of Appeals for the Third Circuit in 1995 and Justices Byron R. White and John Paul Stevens on the U.S. Supreme Court in 1996-97. He is a member of the Bars of California and District of Columbia.

58
Number of readings per contribution