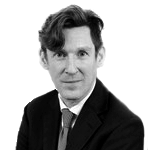 Sean-Paul Brankin is of counsel at Bristows since May 2021 in the competition team based in Brussels. Before that, he was partner in the Crowell & Moring’s Brussels office and a member of the Antitrust Group. Sean-Paul focuses his practice on issues involving EU and UK antitrust law, including merger control and counseling. Among others, Sean-Paul has extensive experience counseling clients on the IP/antitrust interface and dominance issues across the range of their activities. He has been involved in contentious matters before the European Commission and UK authorities and has litigated cases before the European Community courts, the Competition Appeals Tribunal in the UK and national courts in the UK and elsewhere. Sean-Paul has significant experience working with clients in a number of industries, including pharmaceuticals, food and FMCG, chemicals, video games, and financial services. He also has experience advising gambling operators on French, UK, and European competition law and on strategies to use competition law as a means for opening up local markets. Sean-Paul received a first class law degree from the University of Cambridge in 1991 and an LL.M. from the University of Virginia in 1992. He taught UK constitutional and administrative law at Kings College London during the academic year of 1993/1994. Before joining Crowell & Moring, Sean-Paul was a Legal Director at the UK Office of Fair Trading where he headed the competition team in the OFT’s legal and policy unit and acted as the OFT’s lead adviser on UK mergers, with cases including BSkyB/ITV, NASDAQ/LSE and BA/Flybe. Prior to joining the OFT Sean-Paul worked from 1994 in private practise advising on EU and UK antitrust law for Lovells in London and Cleary, Gottlieb, Steen & Hamilton in Brussels and Paris. Sean-Paul is a regular speaker on competition matters. Sean-Paul is recommended by Chambers Europe, Chambers Global, and Legal 500 EU & Global in competition law, consistently cited as “creative and strategic,” and having “excellent knowledge of competition law and the ability to quickly identify the key points and advise accordingly.”

Marieke Van Nieuwenborgh, Sean-Paul Brankin The EU Commission fines a company for restricting the cross-border and online sales of branded merchandise by its European licensees (Nike)

E-Commerce in Europe: A Look into Nike’s Huge Antitrust Fines* On March 25, the European Commission (EC) fined Nike €12.5 million for restricting cross-border and online sales of branded merchandise by its European licensees. In December last year, the EC fined Guess €40 million for imposing (...)

The Digital Market Act (DMA) was born out of a combination of three elements: the desire to regulate certain very large online platforms that have acquired substantial control over access to digital markets; the perceived inadequacies and slowness of competition law in this regard; and the (...)

1577.5
Number of readings per contribution