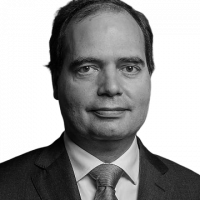 Professional activity focused on competition and regulation matters, being involved in important antitrust cases, both on a preventive or defensive approach, as well as Mergers & Acquisitions operations in what concerns regulatory issues and merger notifications to the Competition Authority and European Commission. Significant know-how in sectorial regulatory practice including licensing, compliance and enforcement actions, where his experience in Public Law represents an added value. Deep knowledge in telecommunications, sports rights, health, transport, energy, food and beverage sectors regulatory aspects are a distinctive factor in his practice.

In Public Law has been acting on public procurement and public contracts execution and administrative procedure matters, representing both public and private entities. Ongoing advisory on the activity and management of public enterprises. Experience in this practice area includes litigation and arbitration, where he has also been appointed as arbitrator.