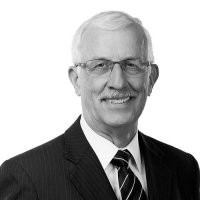 Lawson Hunter is one of Canada’s renowned regulatory and government relations counsel, drawing on a wide range of experience in business, government and private practice. Most recently, Lawson was recognized as the 2016 recipient of the Chambers Canada Lifetime Achievement award for his prominent practice and global reputation as a leading life-time practitioner and influential member of the Canadian bar. Formerly Canada’s senior civil servant in charge of competition policy and enforcement, Lawson was primarily responsible for the drafting of the federal Competition Act. From 1993 to 2003, he was a partner of Stikeman Elliott and head of the firm’s Competition/Antitrust Group. From 2003 to 2008, he served as executive vice-president and chief corporate officer of Bell Canada and BCE Inc., where he was responsible for overseeing regulatory, governmental relations and corporate affairs. In September 2008, he rejoined the Ottawa office of Stikeman Elliott as counsel. From April 2010 – May 2012, Lawson assumed the role of head of the Competition and Foreign Investment Group and recently returned to his role as counsel. Lawson advises a wide variety of Canadian and multinational corporations on all aspects of federal regulatory law and policy. This includes foreign investment legislation, anti-dumping and international trade, telecommunications law and Heritage Canada issues, in addition to competition/antitrust matters. He is particularly noted for his experience as an advisor on the regulatory aspects of mergers and acquisitions. Lawson is a graduate of the Directors’ Education Program of the Institute of Corporate Directors and is highly experienced in matters of corporate governance. He has served as a director of major telecommunications and IT companies such as CGI Group and Bell Aliant and is a former chair and trustee of Bell Aliant Regional Communications Income Fund. Lawson was appointed by C.D. Howe Institute as a Senior Fellow specializing in regulatory and competition policy, and has been appointed to their National Council which advises the Institute’s research program. He was honoured with Lexpert’s Zenith Award: Celebrating Leadership Through Change, recognizing lawyers who have been change-agents in their profession for forty or more years. While in private practice, Lawson has consistently been ranked in national and international surveys as one of Canada’s and the world’s leading counsel on regulatory matters.

2390
Number of readings per contribution