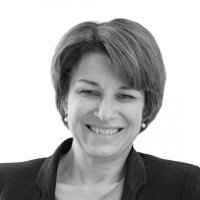 Amy Klobuchar is an American lawyer and politician serving as the senior United States senator from Minnesota since 2007. A member of the Minnesota Democratic–Farmer–Labor Party (DFL), Minnesota’s affiliate of the Democratic Party, she previously served as the Hennepin County attorney. Born in Plymouth, Minnesota, Klobuchar is a graduate of Yale University and the University of Chicago Law School. She was a partner at two Minneapolis law firms before being elected county attorney for Hennepin County in 1998, making her responsible for all criminal prosecution in Minnesota’s most populous county. Klobuchar was first elected to the Senate in 2006, becoming Minnesota’s first elected female United States senator, and was reelected in 2012 and 2018.

1018.5
Number of readings per contribution