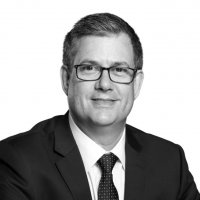 Andrew Smith focuses his practice on energy and resources law, with a particular emphasis on downstream issues, including oil and gas (supply and transport), project infrastructure and financing, and acquisitions and disposals. For more than 30 years, he has advised on the development and ongoing operation of some of Australia’s largest coal, oil and gas, and electricity projects. Andrew is experienced in multibillion dollar project infrastructure and development, joint ventures, and commodity sales, both domestic and international. He has been recognized among Australia’s top lawyers in independent global publications, including as a preeminent energy & resources lawyer by Doyle’s Guide, and in 2013 he was named Brisbane’s Oil & Gas "Lawyer of the Year" by Best Lawyers Australia. Andrew is very familiar with the documentation used in large-scale energy projects, including joint operating, farm-in, and sales agreements. He is a member of several drafting committees of the Association of International Petroleum Negotiators, whose draft agreements are used in the energy industry worldwide. Prior to joining Jones Day in 2017, Andrew played a pivotal role in many major projects, including as counsel for the Australia Pacific LNG project, which has an estimated capital cost of A$35 billion. APLNG is an incorporated joint venture between Origin Energy, ConocoPhillips, and Sinopec to deliver coal seam gas (CSG) to a liquefied natural gas (LNG) project located in Gladstone Queensland. Andrew is a member of the Association of International Petroleum Negotiators, the Australian Mining and Petroleum Law Association, and the International Bar Association.

Terrell McSweeny, Andrew Smith, John Graubert, Laura Kim The US FTC holds an open meeting and adopts several significant proposals that lay the groundwork for what is expected to be an active, expansionist enforcement and rulemaking program at the agency

In her first public action, a mere 16 days after her confirmation and swearing-in as Chair of the Federal Trade Commission (FTC), on July 1, 2021, Lina Khan led a public, open meeting of the Commission to adopt several significant proposals that lay the groundwork for what is expected to be an (...)

116.5
Number of readings per contribution