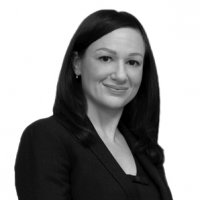 Amy Ray represents clients in high-profile U.S. and international antitrust matters. She focuses on transactions, litigation, arbitration, and investigations with a competition nexus. Global Competition Review featured her as one of its "40 Under 40 – Class of 2016" antitrust lawyers in its global survey. In addition, Amy has been named a "Rising Star" in Washington, DC, by Super Lawyers Magazine (2013-2017). She has substantial experience providing merger arbitration advice to funds and other institutional investors and regularly advises on issues related to the Hart-Scott-Rodino Act. Amy recently has defended litigation clients in antitrust suits spanning the municipal derivatives, credit default swaps, and precious metals industries. Among her other notable representations are matters at the intersection of antitrust and technology, including her key role in Microsoft Corporation’s acquisition of Skype (winner of Global Competition Review’s "Merger Control Matter of the Year – Europe" in 2012); in Microsoft’s acquisition of LinkedIn, the largest in its history (nominated for Global Competition Review’s "Merger Control Matter of the Year – Europe" in 2017); and in the clearance of numerous intellectual property acquisitions. Her pro bono representations include a matter for which the Washington Lawyers’ Committee for Civil Rights and Urban Affairs recognized her case team for its contribution to fair housing litigation. She also served for several years on the prestigious U.S. National Women’s Law Center Leadership Advisory Committee. Amy received her J.D. from Harvard Law School, where she was an Equal Justice Fellow, and a B.A. from the University of Virginia with Highest Distinction. She is admitted to the bars of the District of Columbia and the State of New York, as well as to practice before the U.S. District Courts for the District of Columbia and the Southern and Eastern Districts of New York.

Diana Gillis, Amy Ray The US FTC orders the unwinding of a merger between two companies supplying prosthetics as they were not HSR-reportable (Otto Bock / Freedom)

The HSR Act requires that parties to certain transactions submit a premerger notification filing to the Department of Justice Antitrust Division (DOJ) and Federal Trade Commission (FTC), and then observe a waiting period before closing. Any transaction valued in excess of the HSR threshold – (...)

1045.3
Number of readings per contribution