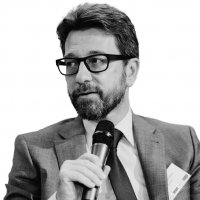 Josep Carpi is member of the AIDE Team of the Legal Service of the European Commission, providing legal analysis, advice and assistance in EU State aid matters and representing the European Commission in Court proceedings. From September 2015 until March 2021, he served as Head of Unit A-2 in the European Commission’s DG Competition, in charge of merger case support and policy. Previously, he hold various management and non-management positions in DG Competition, both in antitrust and in mergers (2008-2014 and 2001-2003). Between 2003 and 2008, Josep Carpi served as a Legal secretary («référendaire») in the Court of Justice of the European Union (General Court). Prior to joining the European Commission, Josep Carpi worked in legal private practice and as a legal adviser for the Representation of the Spanish region of Catalonia before the EU institutions. Josep Carpi holds a Master’s degree in European Law from the College of Europe in Bruges and graduated in Law at the University of Barcelona. He has written or co-written several books and a number of articles on competition law and policy, general EU law and EU Courts and judicial procedure. Among these, the merger chapter in Faull & Nikpay’s (2014), the chapter on substantive assessment of mergers in Drauz & Jones’ (2012; new edition coming in 2021) and the chapter on evaluation of the effects of mergers in Tratado de Derecho de la Competencia (2017). He is co-Chief editor of the quarterly journal Competition Law and Policy Debate (CLPD). Josep Carpi frequently participates as speaker/lecturer in conferences and academic programmes and has extensive experience in international cooperation (EU and non-EU competition agencies, ICN, OECD).

"Votorantim / Fischer / JV Squeezing oranges, not consumers"* Introduction Last year the Commission adopted a decision in what has come to be known as the “orange juice case” , as it dealt with the creation of the leading orange juice supplier to the European market. The Brazilian groups (...)

The integration of public interest considerations is not only desirable, but possible because of the permeability of the competition rules to the reception of well-being by the competitive parameters of quality, choice and innovation in addition to that of price. The scope for progress depends (...)

The European Competition Network (ECN), which is well-known as an effective mechanism of cooperation for the application of articles 101 and 102 TFEU, is not extended to merger rules. However, the need for cooperation in this area encouraged the Commission and the national competition (...)

2198.6
Number of readings per contribution