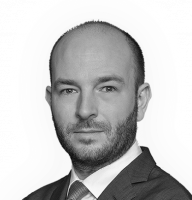 Dr. Gildas de Muizon is a partner at Deloitte. He leads the Analytics, Value & Asset Advisory platform, which includes Forensic & Dispute Services, Economic Advisory, Valuation & Modeling and Real Estate Advisory. Prior to joining Deloitte in 2016, he was the managing partner of Microeconomix.

Gildas de Muizon is an expert in antitrust economics. He provides economic evidence and testimony in all competition matters (mergers, abuse of dominance, horizontal and vertical agreements, state aid, etc.).

He is more particularly specialized in the antitrust aspects of M&A clearance. He is regularly involved in some of the largest transactions on the market and has represented numerous clients before the European Commission and national competition authorities. In 2021, among others, he assisted Beaumanoir in the acquisition of Caroll, Veolia in the acquisition of Suez, Derichebourg in the acquisition of Ecore as well as Newrest in the acquisition of Sodexo Maroc. He has extensive experience of complex cases and “Phase II” merger investigations requiring the development of innovative approaches.

Gildas de Muizon has also wide experience estimating damages in both a competition and a commercial litigation context. He has worked on significant follow-on actions in cartel as well as abuse of dominant position cases. He regularly testifies before French courts. Since 2015, he has been listed as a court-appointed expert (“expert judiciaire”) by the Paris Court of Appeal.

Gildas de Muizon holds a Master’s degree in science & executive engineering from Mines ParisTech and a PhD in economics from the University of Paris X.

The operation notified to the French Competition Authority (FCA) consists in the acquisition of the firm Quick by the firm Burger King France. Burger King and Quick are two fast-food restaurant chains selling hamburgers. The purpose of the operation is to turn 300 Quick restaurants located in (...)

The De minimis communication of the European Commission defines under which conditions agreements between firms will not be considered to restrict competition in a sensitive way. The three contributions in this article discuss its effectiveness in promoting legal security for firms, especially (...)

Different tests have been proposed by the economic literature and used by competition authorities in order to detect anticompetitive conducts. No single test is suitable for every type of practice and the economic theory can help in choosing the most relevant one. I. A middle way between the (...)

The question of remedies, their design, their effectiveness, their implementation and their monitoring is a challenging issue for both the competition authorities and merging companies. The articles in this issue transcribe some interventions made at the recent conference organized by (...)

The 1997 Notice on market definition is one of the oldest guidance notices adopted by the Commission in the area of competition law. Although its main principles appear still valid and uncontroversial, there is arguably scope for further guidance in controversial areas such as the (...)

This set of three papers is derived from the training session organized by the Concurrences Review that was held on 29th March 2012 in Paris. For Gildas de Muizon, Economist and author of the second contribution, the market power of supermarkets must be assessed locally. For this it is (...)

Éric Avenel, Gildas de Muizon, Nathalie Daley The winner’s curse: Should it be taken into account in unilateral effects analysis?

Competition authorities are generally concerned about the decreasing number of bidders resulting from a merger in a bidding market. Economic theory shows, however, that a decrease in the number of candidates may result in a more competitive outcome of the tendering process. The paper discusses (...)

1252.6
Number of readings per contribution