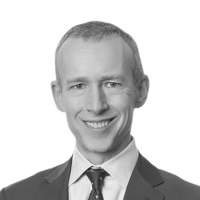 Robert Milne is a member of the White & Case Global Antitrust Practice, which was named as Competition Group of the Year by Law360 seven times. Rob’s practice focuses on complex antitrust litigation, including cartels (both civil and criminal matters), pharmaceutical antitrust, and mergers and acquisitions. Rob is widely recognized as a preeminent antitrust litigator. Among other things, he was named a Life Sciences MVP by Law360 in both 2020 and 2014, for his antitrust work for Life Sciences clients, was short-listed for 2015 Antitrust Litigator of the Year by Global Competition Review, was named a Competition MVP in 2010 by Law360, was named to the (GC-nominated) BTI Client Service "All-Star" list for 2018, received an IOL "Client Choice" award for 2014 in Competition/Antitrust and, earlier in his career, was named to the National Law Journal’s list of "Top 40" lawyers in the country under the age of 40. Chambers USA notes that Rob is "recognized for his trial skills, regularly defending large corporate clients in significant civil and criminal litigation. Sources note that ‘he is very solution-oriented, knows which battles to fight and is excellent in his application of antitrust principles.’" (Chambers USA 2020) Rob was also recognized as a "great strategist" who has a "fantastic demeanor in front of a judge and really listens to the client." (Chambers USA 2016) According to Legal 500, Rob "is noted as a ‘brilliant’ antitrust litigator who is ‘easy to get along with,’ and ‘energetic, insightful and effective’." (Legal 500) Rob represents clients in a variety of industries, including pharmaceutical, agricultural, petrochemical, financial services, chemical, electric generating, cable, telecommunications, and leisure. His cases often involve the complex interplay between antitrust and the intellectual property laws. Prior to joining private practice, Rob served as a trial attorney with the Antitrust Division of the U.S. Department of Justice, where he participated in civil and criminal investigations and trials in jurisdictions around the country.

What’s next for drug pricing in the US? Proposals to alter antitrust and patent laws may signal a renewed focus on drug pricing by federal lawmakers, while the growing web of state laws is expected to increase compliance challenges for the pharmaceutical industry. What’s changing? A new (...)

In a decision that may reverberate beyond the antitrust context, New York’s highest court - the Court of Appeals - held that the state’s antitrust statute lacks the extraterritorial scope to reach a purely foreign alleged antitrust conspiracy. The decision could have broad implications for (...)

Joseph Angland, Martin M. Toto, Robert Milne The US DOJ announces its economic recovery initiative designed to identify any fraud or collusive activity related to the federal government’s stimulus spending under the American Recovery and Reinvestment Act of 2009

On April 13, 2009, the US Department of Justice’s Antitrust Division ("DOJ") announced its Economic Recovery Initiative ("Recovery Initiative"), which is designed to identify any fraud or collusive activity related to the federal government’s stimulus spending under the American Recovery and (...)

George Paul, Jack E. Pace, Joseph Angland, Mark J. Gidley, Martin M. Toto, Robert Milne The Department of Justice withdraws the report untitled Competition and Monopoly (Single-Firm Conduct under Section 2 of the Sherman Act that had been issued by the Division in September 2008)

On May 11, 2009, the Antitrust Division of the Department of Justice (“DOJ”), in a speech by new Assistant Attorney General Christine A. Varney and a press release issued later in the day, formally withdrew the report entitled Competition and Monopoly: Single-Firm Conduct under Section 2 of the (...)

316.8
Number of readings per contribution