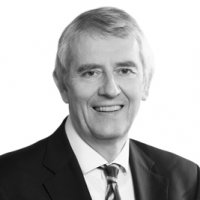 Mr. Gyselen is partner at Arnold & Porter Kaye Scholer (Brussels). His antitrust practice encompasses advice and representation before EU and national agencies on merger control, abusive conduct, cartels, other restrictive practices and state aids. In light of his previous government experience, his expertise is focused in areas where antitrust and regulatory issues are intertwined such as financial services and pharmaceuticals; distribution practices involving manufacturers of fast moving consumer goods such as food; and cartel work including leniency applications. Mr. Gyselen joined the firm in July 2004 after twenty years of public service at various EU institutions. He spent most of his time at the European Commission, where he was a member of the Legal Service in the early years of his career and later held several senior positions in the Directorate-General for Competition (DG COMP). His career at the Commission was interrupted by a three year secondment to the European Court of Justice where he was a law clerk to the then Belgian judge. During his four years as special assistant to the Director-General in DG COMP (1990-1994), he oversaw the entire range of EU competition policy activities, including the introduction of EC merger control, and acted as liaison officer between DG COMP and the Commissioner in charge of competition policy and his personal staff. Between 1994 and 2004, he played a key role in many leading antitrust cases. In the area of abusive conduct, these included Coca Cola (rebates, exclusive dealing, category management) - a case which led him to write an comprehensive article on rebates that received high visibility in the business community. Mr. Gyselen was also case manager in a dozen cartel cases in the financial services, food and agricultural sectors. In the pharmaceutical area, he cleared a number of joint ventures on the basis of a reasoning that was later incorporated in the Commission’s guidelines on horizontal restraints.

Luc Gyselen Mergers in the pharmaceutical sector: An overview of EU and national case law

In the past ten years or so, e-Competitions’ Bulletin has regularly reported about pharmaceutical merger control decisions or judgments from various jurisdictions in the world. Many of these cases involved remedies that were meant to address the antitrust concerns that the competent competition (...)

While the European Commission is exploring a possible revision of the VBER and of the Vertical Guidelines and assessing the various policy options proposed, this volume aims to reflect on some of the relevant issues and subjects in the VBER, some more controversial than others, but all having (...)

This first session of the Vertical Restrictions Conference explores the limits of the application of competition law to vertical arrangements and in particular the case law relating to the concept of agreement under Article 81 or other national competition law provisions, the case law on (...)

Luc Gyselen Do the holder of intellectual property rights have to license their rights to competitors ?

5498.1
Number of readings per contribution