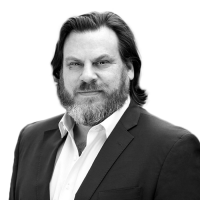 Geoffrey A. Manne is the founder and president of the International Center for Law and Economics (ICLE), a nonprofit, nonpartisan research center based in Portland, Oregon. He is also a distinguished fellow at Northwestern University’s Center on Law, Business, and Economics. In April 2017 he was appointed by FCC Chairman Ajit Pai to the FCC’s Broadband Deployment Advisory Committee, and he recently served for two years on the FCC’s Consumer Advisory Committee. Mr. Manne earned his JD and AB degrees from the University of Chicago and is an expert in the economic analysis of law, specializing in competition, telecommunications, consumer protection, intellectual property, and technology policy. Prior to founding ICLE, Manne was a law professor at Lewis & Clark Law School where he taught Law & Economics, Corporations, and International Economic Regulation. From 2006-2009, he took a leave from teaching to develop Microsoft’s law and economics academic outreach program. Manne has also served as a lecturer in law at the University of Chicago Law School and the University of Virginia School of Law. He practiced antitrust law and appellate litigation at Latham & Watkins, clerked for Hon. Morris S. Arnold on the 8th Circuit Court of Appeals, and worked as a research assistant for Judge Richard Posner. He was also once (very briefly) employed by the FTC.

Geoffrey Manne The US DoJ, PTO, and NIST publish a joint statement on future approach to standard essential patents and FRAND commitments

Unpacking the Flawed 2021 Draft USPTO, NIST, & DOJ Policy Statement on Standard-Essential Patents (SEPs)* Responding to a new draft policy statement from the U.S. Patent & Trademark Office (USPTO), the National Institute of Standards and Technology (NIST), and the U.S. Department of (...)

Early last month, the Italian competition authority issued a record 1.128 billion euro fine against Amazon for abuse of dominance under Article 102 of the Treaty on the Functioning of the European Union (TFEU). In its order, the Agenzia Garante della Concorrenza e del Mercato (AGCM) essentially (...)

Eric Fruits, Geoffrey Manne The US Senate introduces a major antitrust bill which outlaws any merger for Big Tech and other companies valued over $100 billion

The Klobuchar Bill’s Not-So-Bright Lines for Antitrust Scrutiny* In a recent op-ed, Robert Bork Jr. laments the Biden administration’s drive to jettison the Consumer Welfare Standard that has formed nearly half a century of antitrust jurisprudence. The move can be seen in the near-revolution at (...)

Geoffrey Manne The US DoJ conditionally approves a merger in the healthcare industry, subject to structural remedies (CVS / Aetna)

The DOJ’s approval of the CVS/Aetna Merger and vertical innovation by incumbents* Last week, the DOJ cleared the merger of CVS Health and Aetna (conditional on Aetna’s divesting its Medicare Part D business), a merger that, as I previously noted at a House Judiciary hearing, “presents a creative (...)

The EU’s Google Android antitrust decision falls prey to the nirvana fallacy* Today the European Commission launched its latest salvo against Google, issuing a decision in its three-year antitrust investigation into the company’s agreements for distribution of the Android mobile operating (...)

One of the most-anticipated cases of the year heard oral argument on September 9. Verizon appealed the FCC’s Open Internet Order (the agency’s Net Neutrality rules) to the D.C. Circuit. The case raises a number of interesting questions about competition policy, specifically, the interplay (...)

Section 5 of the FTC Act gives the Commission authority to challenge “unfair methods of competition” (UMC). In June 2013, Commissioner Joshua Wright of the FTC released a proposed policy statement on the Commission’s UMC authority. His statement is intended to create guidance for enforcement (...)

Geoffrey Manne, Ohlhausen The US FTC imposes limits on enforcing FRAND licensing of standards-essential patents through the threat of seeking of injunctions (Google / Motorola)

Introduction In January of 2013, the Federal Trade Commission and Google (acting through its subsidiary, Motorola Mobility) signed a Consent Order ending the agency’s investigation into a number of practices. Much of the Order is aimed at imposing antitrust-based limits on the allowable process (...)

Prosecuting loyalty rebates—and other price-related antitrust behavior—entails significant pitfalls for antitrust policymakers. Low prices are one of the key benefits antitrust law seeks to promote. And yet, when it comes to low prices, anticompetitive strategy is almost indistinguishable from (...)

The notion that self-preferencing by platforms is harmful to innovation is entirely speculative. Moreover, it is flatly contrary to a range of studies showing that the opposite is likely true. In reality, platform competition is more complicated than simple theories of vertical discrimination (...)

The e-book market is quite remarkable. The distribution’s economic models of this singular property are original and very different from one system to another. The U.S. and European litigations around the Apple’s practices and publishers, as well that the French law on the e-book price’s (...)

538.2
Number of readings per contribution